Home Europe Offering player to Everton comes with hope of getting €45m from Toffees...
SHARE

For a week or so we’ve been covering claims from France that Everton are proving an annoyance to AS Monaco as the Ligue 1 club try to agree a loan deal for Michy Batshuayi.

It was very much presented as the Toffees asking Chelsea about the player, and potentially signing him themselves.

Then on Wednesday, Belgian newspaper HLN reported that it was Chelsea, and specifically Marina Granovskaia, who had offered the player to Everton, rather than the Merseyside club doing all the chasing.

The basis was a permanent deal, something Monaco don’t want to get into, although the player wants to join them.

In the Thursday edition of HLN it’s claimed several Premier League clubs could be interested as they’re looking for a striker, these are named as Everton, West Ham, Tottenham and Crystal Palace, and Granovskaia has offered Batshuayi to some of those. 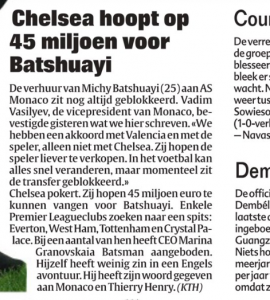 Chelsea are looking to get €45m from a sale, but Batshuayi has given his word to Monaco and has little interest in a Premier League move.

The widespread interest is somewhat curious and shows a lot of faith, given the striker’s first half of the season.

Chelsea may not be so keen to bend to the player’s wishes given it’s thought in Valencia he didn’t exactly give everything to make himself a success in Spain.