The Bordeaux player has eight Ligue 1 goals so far this season, but they mainly came towards the start of the season.

Talk around a transfer seems to be occupying the thoughts of both club and player and he started the weekend’s match against Nice on the bench, getting 30 minutes.

On Tuesday evening, Bordeaux faced Angers and won 2-0, with Kamano not part of the group. He has expected to travel for the match and then a breakdown in communication meant it was teammate Youssouf Sabaly who had to tell him he wouldn’t be required at the airport.

Then on Wednesday several claims came from France of Watford having made a big offer. Including bonuses, the Hornets were said to be prepared to reach around €17m for the player.

Thursday’s edition of L’Equipe raiterated claims of a Watford offer, and quizzed Kamano’s agent Hugo Varela about the situation, and he explained: “It’s speculation, no one from them has contacted us.”

On the club’s decision not to play one of their star men, Varela added: “It’s not a trivial situation but the coach is in charge of the team and we must accept his decisions. Players have feelings, they are not machines.” 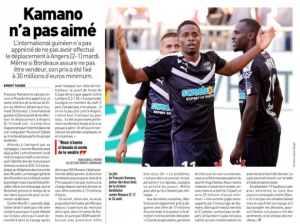 There’s something quite odd going on at Bordeaux with Kamano. They’re pushing out a €30m asking price, which seems unreasonable, whilst saying they don’t need to sell, whilst keeping the agent in the dark, and dropping the player.

Are Watford even involved? It would seem a strange one to make up, and Kamano fits the profile of player the Hornets have been linked with.