Lyon’s search for a new manager continues to be one of the biggest sport stories in France, and Friday’s L’Equipe has an article on the situation.

Club president Jean-Michel Aulas has spoken to the media, as he loves to do, this week and that’s helped hype things further.

The man considered likeliest right now is Laurent Blanc, who has also been linked to Manchester United recently. Those claims haven’t been anywhere near as strong, because the Premier League club still have Ole Gunnar Solskjaer in charge.

Blanc is said to be interested in the job at Lyon, however, L’Equipe then state: ‘…even if he would have a track that would lead him to Manchester United, where Ole Gunnar Solskjaer is hanging by a thread.’

The Frenchman has been out of work since leaving PSG in 2016, so he doesn’t have a recent track record, which may have counted against him for other jobs. 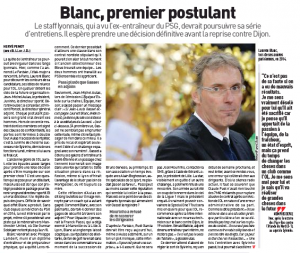 It’s got to be unlikely that he’d reject Lyon on the chance of Manchester United moving for him in the coming months.

Unless something changes quickly, it’s the French side which looks likelier, and more fitting, for Blanc.