Simon Mignolet has once again been edged aside by Jurgen Klopp in favour of Loris Karius.

While neither goalkeeper has shown themselves to be at the top level, the Liverpool manager has clearly held a preference for Karius since signing him from Mainz.

The pendulum of Klopp favour has swung between the two men since Karius arrived, with Klopp at times forced to return to the Belgian because his goalkeeping rival wasn’t cutting it.

Now it’s once again Karius who is the pick, and Mignolet is seeing his Liverpool career starting to fade away.

The Belgian manager is clearly going to be supportive of his number two goalkeeper, and 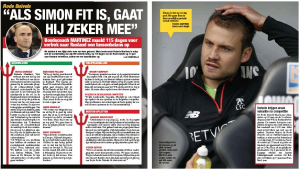 explained: “We know what Mignolet can do and if he is fit, he will certainly come along (to the World Cup). He is now on the bench at Liverpool and that is annoying for him. But he is a top professional. We will mainly support him during this difficult period.”

Martinez’s reaction is no surprise, he’s done similar in the past. When Matz Sels was at Newcastle United and completely out of the picture, Martinez called the goalkeeper up for a morale boost.

Mignolet needs more than support, the Liverpool stopper needs to start the process of finding a new club, unless he fancies playing second fiddle to Karius and potentially another summer signing.