Towards the end of January we brought news from Belgium that Chuba Akpom would be signing for Sint-Truidense Voetbalvereniging, better known as STVV.

The reaction from Arsenal fans was widely to wonder who STVV are, and then hope it would turn out well for the 22 year old.

Having already been on five loans away from Arsenal, with varying success or otherwise, Akpom needed to make a success of this move, and it’s started off rather well.

On Friday, Akpom scored the only goal of the game as STVV beat Anderlecht, a really good result for the club. 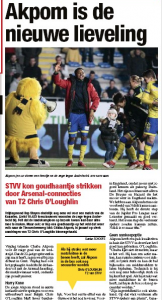 favourite’ and pictures the youngster celebrating with STVV’s mascot.

Chris O’Loughlin, a coach at the Belgium club who helped the loan move happen, was asked about Akpom potentially staying at STVV for longer: “We exclude nothing, but everything depends on Arsenal. I don’t think they can already answer about their plans for Chuba next season. It is too early for that.”

Arsenal have Akpom on a contract lasting until June 2019, so if he was to go on loan to Belgium again next season there’d probably be a renewal first.