Manchester United are keen to sign Christian Eriksen, whose contract at Brentford expires on June 30th.

The Bees took the 30-year-old in the January window and offered him a short-term deal. He impressed for Brentford, managing a goal and four assists from 11 league matches.

On Monday, De Telegraaf reported the ex-Ajax coach has insisted the Red Devils sign the attacking midfielder and Barcelona’s Frenkie de Jong as Ten Hag believes the duo will be decisive in his plans at Old Trafford.

Manchester United are not the only club working to sign the Denmark international. Brentford, down their end, remain hopeful of convincing the former Tottenham Hotspur man to accept their renewal offer.

This has been confirmed by Thomas Frank during an interview with AS, and the Bees boss made these claims when detailing how Brentford signed Eriksen in January.

“I coached Eriksen in the youth ranks in Denmark. In October, my son called me: ‘Dad, why don’t you contact Christian? He has to play football again.’ I called Eriksen in December and asked him if he would consider playing football again at Brentford and he replied: ‘Funny thing is I thought of you too’,” he said.

“I never had any doubts that he would come back to a good level and now I hope we can retain him.” 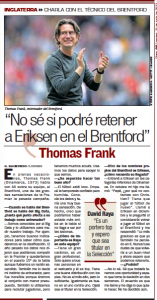 With claims of Manchester United and other clubs showing interest in signing the Dane on a free transfer, AS asked Frank whether Brentford can retain him.

Responding to this, the manager explained: “I do not know. I know we still have a chance and I hope he will make a decision in two weeks. The agreement is that he will call me and tell me what he wants to do. He hasn’t decided yet.”

In other words, Eriksen’s future, whether it will be at United, Brentford or another club, will be clarified in two weeks.