Manchester United face Club Brugge on Thursday evening as they look to progress to the next round of the Europa League.

Ole Gunnar Solskjaer’s side came away from Belgium last week with a 1-1 draw, and whilst that wasn’t a brilliant result, they got the away goal and are well placed to qualify.

The match is of course receiving a lot of attention in the Belgian media. Playing Manchester United is huge, even if the current squad aren’t as good as those which have gone before.

Henk Houwaart is a very experienced Dutch manager, who spent much of his career in the neighbouring country. He both played for and managed Club Brugge, and was in charge of more than ten clubs during his career.

The 74 year old’s last job was with Aris Limassol and he remains a figure in the media, giving his opinion on various things, including the match this week.

Houwaart feels Club Brugge may kick themselves if they don’t give enough importance to the Manchester United match, because it’s a great chance to beat a huge European club. Whilst winning domestic trophies is great, he pointed out nobody really cares outside Belgium, and it’s opportunities like tonight which provide the chance to go down in history. 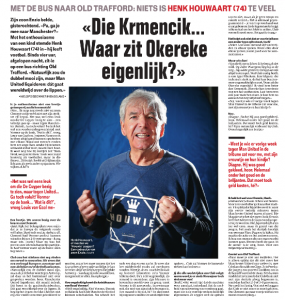 Speaking to HLN, he picked out one player to explain why: “It is just a pity that this is not the Manchester United of yesteryear, with Cristiano Ronaldo and Giggs. Like Pereira… That boy would have to fight to be in the starting line-up of Club Brugge.

“I think it is such a shame that Club did not start with its strongest team at home, because then they would have won 2-0 or 3-0, but now it will be difficult, which does not mean that Club should no longer believe in it. Clement (the manager): go for your strongest and most experienced team.”