Kepa Arrizabalaga last featured for Chelsea in their 2-2 draw against Arsenal on January 21st.

The Spain international has been forced to settle for a place on the bench in the last four matches as Frank Lampard has preferred Willy Caballero ahead of him.

During these four fixtures, the Blues have conceded eight goals and managed only one win in the process.

AS claims during a crisis, experts recommend ‘creating a distraction, a smoke screen or a scapegoat’ to divert from real issues.

The Spanish newspaper suggests Kepa has been made a scapegoat by Frank Lampard to divert from the real problems at Stamford Bridge.

The recent performances have shown the problem lies with Chelsea’s defensive unit and not with either of the two goalkeepers. 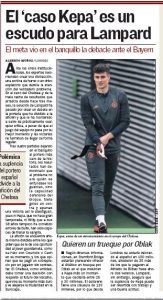 The ‘Kepa case’ has become a ‘shield for Lampard’.

The report adds Chelsea as an entity must make a decision on Kepa’s future as he is going through a tough spell in the English capital. The current situation could also hamper his chances of making it to Euro 2020.

Lampard has faced growing Spanish criticism over his Kepa decision, but it can’t be denied that the goalkeeper was in woeful form prior to being dropped.