The Brazilian international was a transfer target for the La Liga winners in 2017. Their failure to sign him saw them decide against bringing in another player last summer.

Ernesto Valverde’s side waited for the South American as they finally managed to land him earlier this year, but had to meet the financial demands of the Premier League outfit.

It’s claimed that neither the South American nor the 25-year-old wanted to or want to be in a bad position with the English clubs. 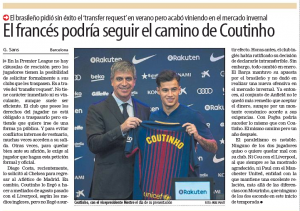 Both Coutinho and Pogba have been grateful for the Merseyside club and the Red Devils, respectively, with the latter maintaining a good relationship with his employer except with his manager, Jose Mourinho.

The Catalan newspaper claim the ‘parallelism is remarkable’ between the ex-Inter Milan man and the Frenchman, and the United midfielder is backed to leave Old Trafford for the Spanish champions next year.

Mundo talks about how Liverpool allowed Coutinho to leave and claim the 20-time English champions could do the same with regards to Pogba in 2019.