Fotomac claim Galatasaray are in the market for a forward after becoming frustrated with Bafetimbi Gomis. The former Swansea City player has been linked with a move to Saudi Arabia.

The Turkish newspaper says Arsenal striker Danny Welbeck is a target for Galatasaray, alongside former Koln striker Anthony Modeste, and that they are currently exploring the possibility of signing the former Manchester United player.

Welbeck could struggle to get games Arsenal this season with the likes of Pierre Emerick Aubameyang and Alexandre Lacazette ahead of him in the pecking order.

According to Fotomac, Galatasaray are ready to make a loan offer to Arsenal for Welbeck and are hoping to land the England international before the Turkish transfer window closes. 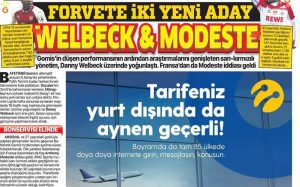 With Gomis expected to the leave the Istanbul club, it’ll be no surprise if Galatasaray will sign a new striker before the transfer deadline on 31st of August, but targeting Welbeck seems an ambitious move.