Manchester United youngster Isak Hansen-Aaröen has been warned to remain patient with his career amid comparisons to Arsenal’s Martin Ødegaard.

Hansen-Aaröen has been with Manchester United since 2020, when he joined them in a deal from Tromsø IL, in Norway.

He’s since worked his way up from the U18s to the Under 23s, making 28 appearances in all competitions in the side that recently won the FA Youth Cup.

His performances have been impressive, and that’s seen plenty of hype about his future, with the 17-year-old among a crop of youngsters who could be set for bright futures at Manchester United.

To do that, he will have to avoid the pitfalls that catch out many a young player who are hyped but struggle to hit the heights.

The man who he’s been likened to, Arsenal’s Martin Ødegaard, can certainly testify to that, having emerged as a youngster but struggled following a high profile move to Manchester United. 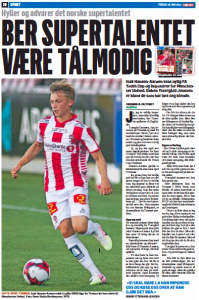 He’s since got back to the top after moving to Arsenal, and Hansen-Aaröen’s former teammate Yttergård Jenssen has warned the United man about avoiding his compatriot’s route.

“I have also seen some highlights from him at United. It seems like he’s doing very well there,” he told Dagbladet.

“I thought he was very good, and the fact that he has taken the next step so well is very exciting. I sensed that this was a talented lad already at the first training session.

“He has some skills that are absolutely raw. He is so playful with the ball. And the way he moves on a football field … There’s something artistic about it. He reminds me a bit of Martin Ødegaard.

“We just have to let him impress us and rejoice that he is doing well. Then we’ll see how far it goes.

“A football career goes up and down. Right now, he’s on a roll, and there’s bound to be some adversity. So let’s hope he copes well and continues that upward trend in the long term.”