Following reports from the Italian media saying the Red Devils turned down a loan offer from Milan, the outlet says they’ve managed to confirm the claims with their own sources.

It’s said Manchester United are only letting the player go on a permanent move, as they want to recover part of the €22m spent on his signing back in 2018.

According to the report, Milan remain interested in the player, despite the first denial, and the story could have more developments soon. 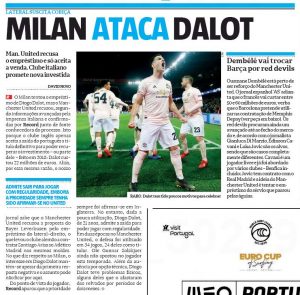 Record learned that the Old Trafford side also rejected an offer from Bayer Leverkusen, as the German side also wanted him on a loan.

It’s claimed that Dalot’s priority is to ‘affirm himself’ in England, but due to the few minutes he’s been getting, he ‘admits’ he could leave to play more regularly.

The fullback’s last appearance for Manchester United was in June, and he wasn’t even taken to the bench in the Premier League this season.