After Maurizio Sarri was appointed as Juventus manager in the summer, things haven’t been good for Emre Can.

The midfielder has been left out of the Turin club’s Champions League squad and hasn’t started a game in the league this season. The Serie A winners have a few players they would like to offload in January and the 25-year-old is among them.

Four days ago, Tuttosport talked about the Germany international being a player who could be offered to Manchester United.

The Italian newspaper once again talks about the Red Devils and states ‘the United option’ still remains available for the player in the next market.

Sarri will have to rotate players because of the number of fixtures, which is why the former Liverpool man could still get opportunities.

He also needs to play so that he doesn’t lose his value when the next transfer window opens in January. 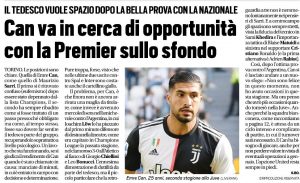 Meanwhile, Can played the full 90 minutes for Germany in their 2-2 friendly draw against Argentina and remains hopeful his situation could change once he returns to Juventus.

“I am not happy at this moment. I have not had opportunities in this season. But now I think I will have more opportunities when I return to Juventus,” he said.

Manchester United interest may be wishful thinking on behalf of Tuttosport.