Italian newspaper Tuttosport has one more of their many stories about Paul Pogba’s possible return to Juventus.

This time, they start by saying the midfielder has been demanding a salary of €30m to renew his contract with Manchester United. That’s the same amount that Cristiano Ronaldo makes at the Old Lady.

But it’s the Red Devils who are holding the cards here, because although his contract expires in 2021, the club have the option to extend it for a further year.

Despite Pogba’s wish to return to Juventus, Tuttosport says that Manchester United don’t even comment on the subject, as they have no intention of letting him go so early. 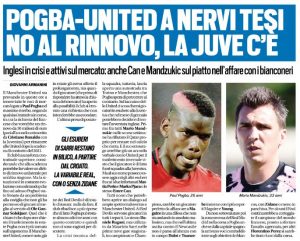 However, and there’s always a however, the Premier League club’s ‘technical crisis’ could end up in a transfer for the Frenchman.

And that’s the most interesting part, because Tuttosport names a few players who could be interesting for Manchester United, since they need signings for ‘all positions’. These would be Mario Mandzukic, Emre Can, Marko Pjaca, Mattia Perin and Daniele Rugani.

Unlike what has been reported elsewhere, they don’t actually say Mandzukic and Can could be sent in straight exchange for Pogba.