As you will be aware if you’ve followed our coverage of Manchester United over the past few months, Ole Gunnar Solskjaer’s scouting team have taken a bit of an interest in Marash Kumbulla.

The Verona centre-back, who was playing his first full season with Hellas Verona until everything was suspended, has been impressing scouts around Europe, allowing the Serie A side to rub their hands at the prospect of a big profit.

Corriere di Verona on Friday give us a list of clubs that are still following the youngster, explaining Manchester United, Watford and Everton are the three English sides tracking him, although previous reports suggest there are more, like Manchester City or Chelsea.

Either way, there’s also competition from abroad, with German teams, namely RB Leipzig and Eintracht Frankfurt, as well as Italian ones (Napoli and Inter) keeping an eye on the situation. 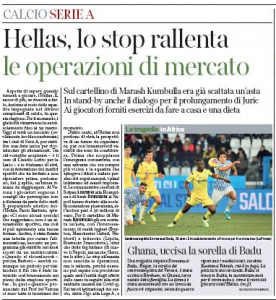 Corriere di Verona state the Covid-19 outbreak might have slowed things down, but hasn’t stopped the work behind the scenes from clubs, including Verona, suggesting there’s still an expectation transfers will take place regardless of whether the season ends on the pitch or off it.

The issue will be if this affects prices, but regardless of whether the Serie A club’s asking price is €30m (as has been previously claimed by other sources) or lower, Manchester United should still be able to afford it if they want to bring him in to add depth to their defence.