Last summer was a bit of a strange one for Manchester United, as they desperately needed a new central midfielder, but didn’t buy one, waiting until January and Paul Pogba’s injury to get Bruno Fernandes from Sporting CP.

Furthermore, there were many rumours the Frenchman could exit Old Trafford, which would have forced Ed Woodward and co. into action to replace him, with Sergej Milinković-Savić the name on everyone’s lips for a few weeks.

Lazio weren’t really interested in selling, meaning Claudio Lotito, the club’s owner, was asking for somewhere around €90-100m for his star man; a price that was never met.

Since then, the Serie A side have become one of the main players in the league before it was suspended, as they sit second, one point behind Juventus.

Milinković-Savić’s performances have a lot to do with that, and those previously interested have returned, according to Il Messaggero. 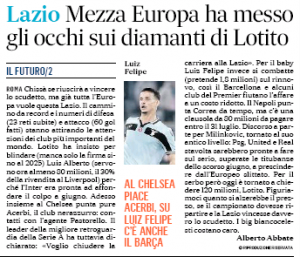 This, of course, includes Manchester United, as well as Paris Saint-Germain and Real Madrid, who are ‘ready to take it seriously this time, having overcome the hesitations from last June’.

It remains to be seen if anyone will be willing to pay that much for a footballer come the summer with everything that’s going on, but unless the Red Devils make a big sale in the coming months, it seems unlikely they’ll open their cheque book that widely.