Starting Thursday’s friendly against Tottenham, Paul Pogba’s presence on the field suggested a move to Real Madrid isn’t as close as the Italian media think.

For the past four days, there’s been a general consensus that Sergej Milinkovic-Savic is very close to a transfer to Manchester United, where he would replace the departing Frenchman.

This is further pushed on Friday by a number of outlets, starting with Gazzetta dello Sport, who once again emphasise the player is leaving for around €90m (€75m + €15m in bonuses).

The transfer agreement between the two sides is already ‘wrapped’, with just a few small details to ‘iron out’, but nothing that could scupper the deal.

No, what’s holding everything up, as you might have guessed, is Pogba’s exit, which the newspaper believe should be done soon, with Milinkovic-Savic needing to wait ‘just a few days, but not many’.

Over at Corriere dello Sport, there’s more focus on the player’s agent, Mateja Kezman, who is now in London (after apparently being in Manchester on Thursday) at the Premier League club’s offices to talk with those in charge.

It’s explained the €90m is a compromise, with Claudio Lotito wanting €100m, while the agent thought it would be easier to sell his client at €80m. 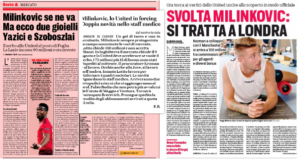 It’s pointed out the offer hasn’t officially been made, but with Kezman knowing Lazio’s demands, and Manchester United seemingly prepared to meet them, there shouldn’t be too many hiccups once the money is placed on the table.

Some extra negotiating would undoubtedly take place, but nothing too drastic.

It’s believed a wait of 8-10 days is expected before this goes through due to Pogba, whose sale is the ‘indispensable condition’ for Manchester United to move.

While the player feigns innocence publicly, he has apparently made it clear to Lazio he would like to leave for a top club, but would also be happy to stay if no offers came in for him.

Il Tempo say much of the same, but it’s Il Messaggero who decide to be different, claiming that the €75m + €15m have been ‘returned to sender’, as Claudio Lotito is unwilling to reduce his €100m demands.

Conflicting reports in what is becoming a rather frustrating saga.