Home Europe Man United player had surgery on Thursday and will be out of...
SHARE

Suffering from a foot/ankle problem, the midfielder returned for Manchester United at the end of December, having been out of action since September.

He only managed 70 minutes across two games before again being unavailable for the club.

Ole Gunnar Solskjaer this week announced Pogba had been advised to have surgery by ‘his people’, before the Premier League club quickly sent a new version out, insisting it had all been a joint decision with United’s medical team involved.

L’Equipe say Pogba will be out of action for six weeks. He’s had a ‘cleaning’ of the right ankle, which ‘always made him suffer’.

It doesn’t sound like an emergency situation, but one to help the player in the medium to 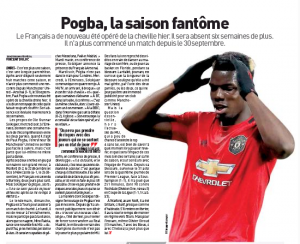 long term, and to deal with the issue now rather than parking it and waiting until later in the season or the summer.

Manchester United will hope they can welcome Pogba back in February, and the French national team are likely happy this has been cleared up well in advance of Euro 2020.