The France international returned to action in his side’s 2-0 defeat to Watford after being sidelined since end of September. He also came off the bench against Newcastle United, but missed the Red Devils’ victory over Burnley at Turf Moor.

Ole Gunnar Solskjaer confirmed the midfielder missed his side’s 2-0 defeat to Arsenal on Wednesday due to an injury.

Tuttosport claims the United manager’s comments are true, even though he previously suggested Pogba would be involved against the Gunners.

Their headline mentions ‘total chaos’ between Pogba and United and the newspaper takes a look at the possibility of where the 26-year-old could move, without neglecting his will.

It’s claimed Pogba has ‘desires’ and ‘aspirations’ and all of it can be fulfilled away from Old Trafford. The constant reports over his future haven’t died down as he gets linked to Real Madrid and Juventus.

The Frenchman has given a ‘clear yes’ to a Juve return and is ‘intrigued’ by the prospect of returning to his former club.

If Pogba remains open to the idea of returning to the Turin club, the Old Lady will give attention to remodelling their midfield as Maurizio Sarri already has several options in that position. 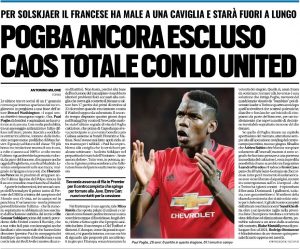 Tutto’s report doesn’t give any strong feeling that Juventus would push for Pogba’s signing in January and no figures are mentioned in the report.

Despite the claims, this doesn’t feel like anything especially new from the Turin newspaper.