Marouane Fellaini’s is set to end his five-and-a-half year stay at Manchester United and will make a switch to China, if rumours are to be believed.

Wednesday’s edition of Belgian newspaper Het Nieuwsblad claims Shandong Luneng, the Chinese Super League side are close to securing the services of the midfielder.

The former Everton man, who is currently sidelined with an injury, has agreed personal terms with Shandong Luneng and is expected to be on a plane in the next few days to sign a contract with his new club.

He will be offered a three year deal and the figures of the salary offered are ‘dizzying’ as the 31-year-old will earn net wages of €14.5m a year.

Having signed a new two year extension at Old Trafford last summer, it’s thought United will earn €12m from his sale. Since Ole Gunnar Solskjaer replaced Jose Mourinho in December, Fellaini has struggled for minutes when he is fully fit.

A move to China is something that has been on the Belgium international’s agenda for a long time and he’s now expected to get his wish fulfilled by joining Shandong Luneng. 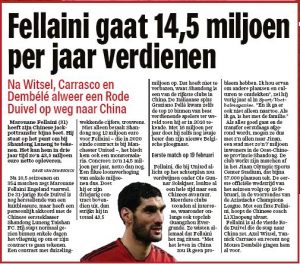 The report says if everything goes well, the transfer can be ‘completed soon’.