Tuesday afternoon, news broke in Spain that Arsenal were back in talks with Barcelona for Denis Suarez.

Later that day, Mundo Deportivo reported the midfielder has skipped training and was ‘finalising paperwork’ for his transfer to the Emirates Stadium.

The former Villarreal man will extend his contract at Camp Nou until 2021 and will then join the Gunners on a loan deal. The north London club will have an option to buy him in the summer.

Wednesday’s edition of Catalan newspaper Mundo Deportivo now claims the Spaniard will travel to London today to complete his temporary move to Arsenal, and that his agent Joseba Diaz is already waiting for his client in the English capital.

Real Betis and Sevilla also showed interested in signing Suarez, but the player’s desire was to only reunite with his former manager Unai Emery, which is why he wanted to join the Premier League side. 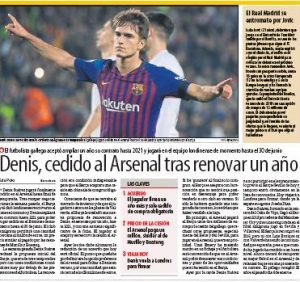 The report mentions that Arsenal will pay €2m to Barcelona as a loan fee for Suarez, who is hoping to relaunch his career during his spell with the English club.