It was on Friday that newspaper Correio da Manhã first reported the Red Devils’ interest in the 20-year-old, just claiming they were ‘eyeing’ him for some time.

Now in a much stronger story, newspaper A Bola features a piece claiming a bid from Manchester United is ‘imminent’, with the Old Trafford side following him ‘with a lot of interest’.

Despite pointing out that Newcastle are interested in the player as well, A Bola writes the Red Devils are actually leading the race for the player, and have ‘a plan to convince’ the Lions of accepting the transfer.

Manchester United are said to be aware that the Lions would only let Inácio go for the price of his release clause, which is of €45m. It’s claimed the Premier League giants could then put on the table an offer of €40m and the rest in performance goals. So that amount could be enough to convince the Lisbon side. 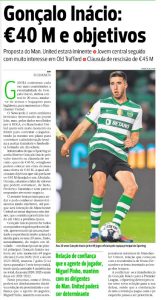 A Bola claims developments could happen ‘very soon’, as United are in a hurry to get this signing done, since it’s considered to be a ‘priority’ for the next season.

The player is represented by agent Miguel Pinho, the same as Bruno Fernandes’, and his relationship with Manchester United could be ‘absolutely decisive’.