The outlet writes that the Red Devils are ‘eyeing’ the 20-year-old defender, who’s been excelling for the Lions this season.

It’s claimed that even though no official bids have been made for Inácio yet, the interest ‘is real’, with Manchester United following him ‘for some time’.

Sporting, however, don’t even want to discuss his sale, with manager Ruben Amorim already claiming he’d like to have the defender in the squad for the next season. So the price tag for the summer window is pretty simple, as it’s the €45m from his release clause. 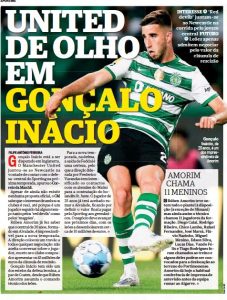 Earlier this week, the Portuguese media had already reported Newcastle United’s interest in Inácio as well. And this time, Correio da Manhã puts the Magpies and the Red Devils side to side in the battle for the defender.

So if Erik ten Hag’s side go for his signing, they better be aware there’ll be a heavy competition from their Premier League rivals, who’d already made an attempt to sign the defender in the January transfer window.