A couple of days ago, it was reported in France Football that Manchester United, looking to continue their squad revamp, would likely turn their attention to Dayot Upamecano for the centre of their defence.

Arsenal had been the first of the interested Premier League clubs to do some work on the RB Leipzig defender, but their financial limits meant they had since ‘lost ground’ on the competition, which included Ole Gunnar Solskjaer’s side.

In fact, France Football suggested United could ‘come knocking again’, and that’s been backed up by L’Equipe on Thursday.

The French newspaper explain the Premier League sides who are interested (Arsenal, Manchester City, Manchester United or even Liverpool) have the advantage over the rest of the European competition.

Each and every one of them have, ‘with varying degrees’, made their interest clear, although none of them have taken ‘concrete steps’ and approached RB Leipzig just yet.

Furthermore, it’s stated Upamecano ‘doesn’t hide his attraction for England’, but ‘he has yet to choose his next destination’. 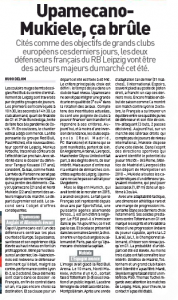 What he wants first and foremost is ‘time on the pitch in a high level club’ and certainly doesn’t want to end up in a system where he will have to rotate.

As for the price, his clause is fixed at €60m, but, unlike France Football, L’Equipe don’t mention that a deal could be done for less.

Still, in today’s market, regardless of the Covid-19 situation, that’s a fair fee for a 21-year-old already playing beyond his years.