After months of rumours, Manchester United are reportedly ready to make a double offer for two Benfica stars.

According to Correio da Manhã today, besides confirming their long time interest in the Swedish defender Victor Lindelof, the Red Devils will also make an attempt to sign the Brazilian goalkeeper Ederson.

The newspaper claims the chase should have developments after the Portuguese Cup final on Sunday, when the Eagles will be facing Vitória Guimarães.

Regarding Lindelof, it’s said that Manchester United were upset Benfica announced his contract renewal at the start of the year, since the negotiations were close to being done.

Despite that, there’s said to have been a huge leap forward. Correio da Manhã claim that Benfica and United the final details which will let them announce a transfer, valued at around €45m.

On Ederson, it’s said that United are demanding €85m from Real Madrid for David De Gea, and in case he really goes, part of this money will be invested in the Brazilian. 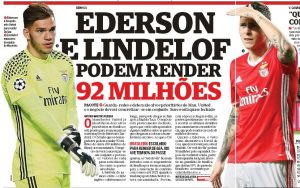 On Ederson, it’s exactly what they also claimed at the weekend.

Record also has a story on the goalkeeper today, saying that no matter what the total amount of a sale will be, Benfica will demand €30m for their 50% share of him. That, again, has been claimed before. 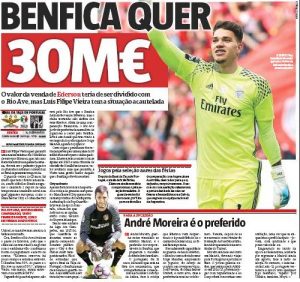 release clause, the club and argent Jorge Mendes will have to negotiate with Rio Ave, who own the other half.

Back to Correio da Manhã’s story, it’s stated that the double swoop should cost Manchester United €92m (€80m). But although the deals would be announced together, the fees will be negotiated separately.