Like many clubs out there, Manchester United are in the middle of a complete revamp behind the scenes, and after years of trusting CEO Ed Woodward with transfers, it appears they are set to favour the director of football approach going forward.

That being said, their search has proved fruitless as of yet, perhaps waiting to make a final decision on their manager before finding the right man to ensure the incoming players aren’t just money making machines but actually benefit the team on the pitch.

With all fingers seemingly pointing to Ole Gunnar Solskjaer following his great spell in charge as caretaker, the Red Devils could be set to move on in the hiring process, and names have already appeared here and there.

One of them, according to Il Tempo in Italy, is Luis Campos, recently linked with Chelsea. 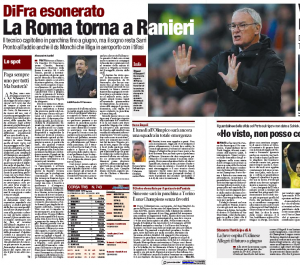 Currently at Lille, where he has done a great job this season with the acquisitions of players such as Jonathan Bamba to help catapult the team into second in Ligue 1, the Portuguese man is also among the names on Roma’s list in case/for when Monchi leaves the Serie A side in the summer.

The Italian newspaper state Luis Campos is ‘also being followed’ by Manchester United and the Blues.

As for Monchi, it says Arsenal are ‘waiting on him’, but give no details about whether he will actually go there.