Barcelona president Josep Maria Bartomeu has already confirmed that Ajax defender Matthijs de Ligt’s name is on the list of transfer targets for the summer.

The Netherlands international has been a standout player for his club this season and impressed with his display during his side’s 4-1 win over Real Madrid at Santiago Bernabeu.

Friday’s edition of Mundo Deportivo claims the La Liga winners have made him a priority target and have received a lot of signals to sign the centre-back, who could be fundamental for the next decade.

The 19-year-old is expected to be Gerard Pique’s long-term successor at the Camp Nou and the Dutchman’s arrival could help him learn from the former Manchester United man.

With the Blaugrana already agreeing a deal with Ajax for Frenkie de Jong, the teenager now wants to follow his compatriot to his new club and the Spanish champions ‘will do everything possible’ to complete the transfer.

Barca believe the price tag will be less than €75m and he would be paid a gross salary of below €10m per season. In addition to this, the Eredivisie outfit prefer De Ligt to join the Catalan side due to the two clubs’ identical philosophy.

Jeison Murillo arrived at Barcelona on loan in January and will return to his parent club, while Thomas Vermaelen will leave in the summer. This will leave Ernesto Valverde with Pique, Clement Lenglet, Samuel Umtiti and Jean-Clair Todibo as the four centre-backs in the squad. 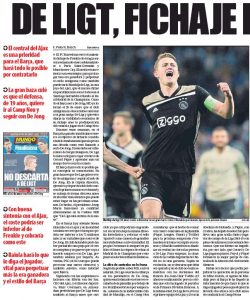 Mundo claims the star’s representative Mino Raiola could ‘harm the operation’ because the super-agent’s idea is to take the Dutchman to another club and then bring him to Barcelona two years later.

However, Barca have received information that Raiola will listen to his client, even though he has other plans for De Ligt.