The club are prevented from registering new signings for two windows, related to problems with bringing in players under the age of 18.

Whilst the Premier League club have made it clear they’re set to appeal the FIFA decision, it’s still very much a problem for the short and medium term future of the club’s incoming transfers.

Despite all of that, France Football report Chelsea have been in contact over appointing Luis Campos, in what would be a role similar to a sporting director but would almost certainly mainly relate to transfers in and out of the club.

France Football report that Campos’ agent has been holding conversations with several ‘great clubs’ and Chelsea are the only one named. 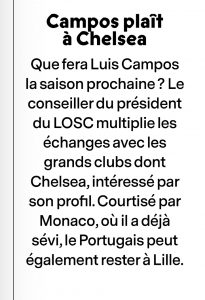 Campos made a name for himself at AS Monaco and has more recently been working with Lille, who have been facing financial difficulties.