As Frenkie de Jong continues to impress for Ajax and the Netherlands, his stock continues to rise and so does the number of clubs interested in securing his services.

Over the weekend, we carried a report from Mundo Deportivo, who claimed Manchester City are moving ‘especially to sign’ the 21-year-old, along with Paris Saint-Germain.

Tuesday’s edition of another Catalan newspaper, Sport, has a story about the player, who can play anywhere in the midfield and also in the defence.

It is claimed Real Madrid are also looking at the option of signing him as they believe he could be a replacement for Luka Modric.

This is when the report mentions the 13-time European champions will face competition from their league rivals, Barcelona, and Pep Guardiola’s side in the race to land the Eredivisie star.

Sport mentions Manchester City’s Txiki Begiristain has already met the Dutch club and De Jong ‘several times’ to discuss about a potential transfer. That would push the club ahead in the race to sign the very highly rated youngster. 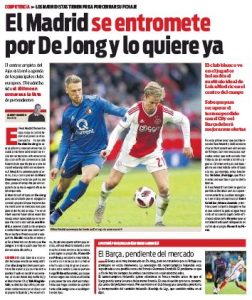 If City manage to beat competition for the Ajax player, it would be a step forward for the future of the club and show strength in the transfer market, given how many other top sides are interested.