Kevin De Bruyne struggled with injuries last season, but things have been very positive for him this term.

The former Chelsea man has managed five assists and a goal in four league appearances for Manchester City and continued his fine form for Belgium during the European qualifiers.

He registered three assists and then went on to score for his country in their 4-0 victory over Scotland on Monday. With a hat-trick of assists, the 28-year-old became the first player to achieve that feat in the Euro 2020 qualifiers.

Four days ago, the Etihad star decided not to respond to claims if he’s in the ‘best period’ of his career.

After the tie in Glasgow, De Bruyne was asked if he’s ‘the best in the world’ and his response is relayed by Het Nieuwsblad.

“Fortunately, I don’t have to judge that. I just have to play well. I am just content. I feel good. I have already played many games and am starting to get into my rhythm. That is important, because there are still many games to play,” he explained.

The player was asked if he prefers to play in the No 10 role for his country, and said: “That makes no difference at all. When I’m down [the pitch], I can do other things. I am not concerned about that.” 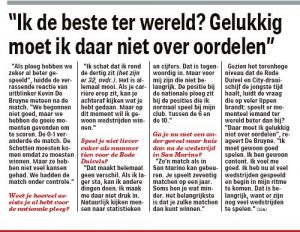 “Of course, people look at statistics and figures. That’s how it is today. But for me these are not important. The position of the national team is the positions I normally play at my club. Between 6 and 10.”