When Philippe Sandler joined Manchester City last summer, he was recovering from a knee injury that he picked up in May 2018.

The defender spent close to six months on the sidelines and after recovering, the 22-year-old was hardly presented with opportunities at the Etihad.

Pep Guardiola allowed the centre-back to join Anderlecht on a season-long loan deal in the summer and after featuring regularly for the Jupiler Pro League side, he missed the last two fixtures due to injury.

Three days ago, Het Laatste Nieuws reported there is a ‘hint of mystery’ over the Dutchman’s latest setback and he even travelled to Spain to visit a specialist.

Anderlecht have seen several of their players picking up injuries this season and Het Nieuwsblad explained they conducted an internal investigation, but were unable to pinpoint a cause.

While talking about Sandler, the Belgian newspaper once again states the player travelled to Barcelona and go on to further mention that he met specialist Ramon Cugat. 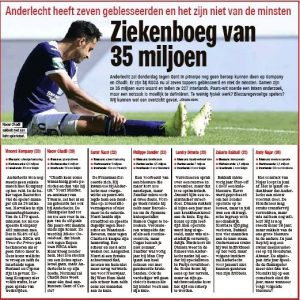 Anderlecht coach Franky Vercauteren suggested it was a routine visit, but Het Nieuwsblad have raised concerns.

The report once again talks about Sandler’s injury from last season and suggests he doesn’t want to take ‘any risks’, if he feels uncomfortable in his knee.

Manchester City will be keeping a close eye on things.