Home Europe Man City and Juventus in race for midfielder, West Brom may have...
SHARE

Since announcing his partnership with Pere Guardiola’s company Media Base Sports, William Carvalho hasn’t stopped being linked to Manchester City.

Frequently speculated at English clubs, the player suddenly became a big target for the Sky Blues, even though we were always a bit skeptical about those reports coming out of nothing.

And this story doesn’t want to vanish, as, in a full page article from A Bola this Monday, it’s said that City are alongside Juventus in the lead to sign the player next summer.

According to the newspaper, both clubs have been following the player for a long time, and in City’s case, Pep Guardiola’s brother could help with the transfer. 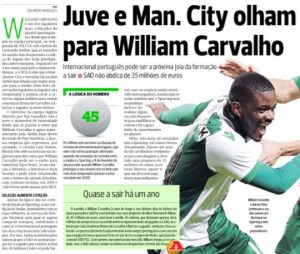 Carvalho has a €45m release clause, and Sporting would only hear offers starting at around €30m, although €35m is what they really want.

It’s recalled by A Bola that last summer, West Brom got close to bringing the midfielder to the Hawthorns, but the Baggies’ €30m offer was short as the Lions were demanding the same €35m.

It’s just funny to read that Manchester City have been following the player for a long time now. If so, why was their interest only reported after Pere Guardiola’s deal? We’re still not buying that.