Manchester City’s search for a new centre-back continues, and it appears to be far from Naples, where it all started.

That’s what the news over the weekend would have you believe, with multiple claims the Premier League club had turned their attention to Sevilla’s Jules Koundé.

A bid of €55m was said to have been made, although the La Liga club weren’t interested in that amount, pointing to the 21-year-old’s €90m release clause.

This is somewhat reminiscent of the situation with Kalidou Koulibaly, who has been the main target at the Etihad all summer.

However, the inability to strike a deal with Aurelio De Laurentiis through Fali Ramadani appears to have forced them to look elsewhere, and a return for the Senegalese seems unlikely at this moment in time. 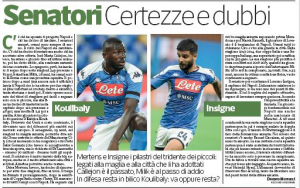 This is what Corriere del Mezzogiorno would have you believe on Monday, explaining Manchester City have now ‘frozen’ their attempts to sign Koulibaly, leaving the door open for Paris Saint-Germain.

Then again, the asking price of ‘at least €70m’ is also putting of the French club, meaning the centre-back ‘could still stay’.

That’s all there is in Italy’s papers on Koulibaly this Monday, giving you an idea of where things stand in this saga.