While Milan have gone about their business in the transfer window rather nicely, there are still some areas of the pitch they’d like to strengthen.

One of those is their defence, where a new centre-back would be ideal for Stefano Pioli, who has convinced most he is the right man for the job at San Siro.

There are two names being pushed on Monday by Tuttosport, and one of them is recurring target Kristoffer Ajer, currently contracted to Celtic.

The Norway international, who can play either at centre-back or defensive midfield, is alongside Wesley Fofana on the list, with neither easy targets to attain, for two reasons.

The first being Milan need to sell before investing more money into their squad, with Lucas Paquetà seen as the likeliest expendable to reach that goal.

The second is neither Celtic nor Saint-Etienne are particularly keen on seeing their respective players go, and the Scottish club ‘isn’t an easy store to dip into’. 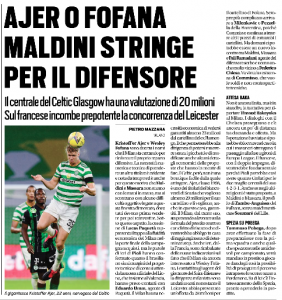 Neil Lennon’s side are said to want ‘at least €20m’ for Ajer’s transfer, and want it all ‘guaranteed’, meaning up front.

Milan, down their end, ‘are trying to work on a paid loan with a view to buy that would become compulsory in case of certain steps being met’.

We doubt that will be enough to convince Celtic, especially this late in the window, but there’s no harm in trying.

The worst the Parkhead club can do at this point is say no.