Barcelona’s appointment of Ronald Koeman caused concerns among a section of Liverpool fans in the last 24 hours.

That’s because the La Liga side’s new manager has reportedly set his sights on Georginio Wijnaldum.

On Thursday, Algemeen Dagblad reported the 29-year-old is ‘very high’ on Koeman’s wish-list and the latter has asked the midfielder ‘not to sign’ a new deal with the Reds.

The Netherlands international is in his final year of contract at Anfield, and it wasn’t clear whether or not he would take his former national team manager’s advice.

Friday’s edition of Sport brings the latest development. They state the ex-Newcastle United man has ‘paralysed’ the contract negotiations with Jürgen Klopp’s side and is ‘waiting for Barca’.

Wijnaldum will no longer be able to play under Koeman for the Netherlands, and therefore, he wants to ‘continue’ playing under his compatriot at the Camp Nou.

However, his signing is subject to the Catalan club cutting ties with a few of their own players. According to the report, the former Everton manager’s priority is to offload Ivan Rakitić and Arturo Vidal. 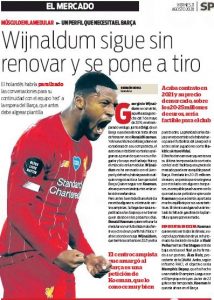 Wijnaldum’s contract situation at Liverpool would make him available for €20-25m this summer, believe Sport. His asking price is ‘affordable’ for the Spanish giants, if they manage to get rid some of their own players.

The Liverpool player’s signing would be an ‘express request’ of Koeman, who believes the Dutchman can provide a lot of balance for Barcelona.