On Tuesday, it was reported by Corriere dello Sport that Lazio were ‘confident’ of getting Bobby Adekanye to sign a three-year deal so he can join them on a free transfer at the end of the season.

The story was based on the Liverpool forward’s agent travelling to the north of England to oversee the final details of his client’s contract, including his own fee.

If Il Messaggero on Wednesday are to be believed, once that was done, both Adekanye and his agent then travelled to Formello ‘in great secret’, Lazio’s training ground, in order to put pen to paper to the contract that seals his future for the next three seasons.

He then visited the rest of the infrastructures in detail before heading to the Coliseum for some touristic activities. 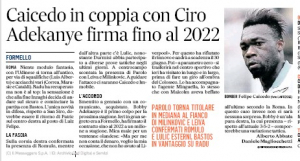 The 20-year-old will earn €1m/year at Lazio, which is considerable for a player his age at the Serie A club, suggesting he is likely to feature in the first-team sooner rather than later.

This scenario is what Adekanye was hoping for when he decided to try his luck elsewhere, unable to break into the first team at Anfield under Jürgen Klopp.