Bobby Adekanye to Lazio has been one of the main stories regarding the Rome based team over the past few months, and it’s about to come to an end.

At least, that’s what Corriere dello Sport believe on Tuesday, claiming the Liverpool forward is on the verge of agreeing terms with the Serie A outfit, a contract that will see him committed to Simone Inzaghi’s side for the next three years.

The player’s agent has travelled to Liverpool, most likely to put the finishes touches on his client’s deal, with just a final say on the wages and the representative’s fee to be sorted out.

The Italian newspaper explain the past ten days have been a back and forth between Adekanye’s entourage and the Serie A club, with the operation now close to completion. 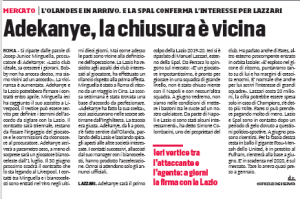 Lazio weren’t the only ones interested, but a renewed and improved offer following their initial approach set the foundation for the deal currently being finalised.

It’s now reached the stage where, ‘barring a surprise’, Adekanye will be leaving Liverpool in June and wearing the light blue shirt next season.