Arsenal are named today in the race for Sporting midfielder Bruno Fernandes.

As newspaper A Bola talks a lot about Manchester United’s chase for the player, they say the Gunners are among PSG, Milan and Juventus in the list of sides who also want him.

The story brings good and bad news for Arsenal.

Starting with the bad, it looks like the Red Devils have the lead in the race, and are willing to pay the midfielder’s €100m release clause.

The good is that despite the advantage from United, the London side have the player’s wish at their said as well. That’s because Bruno Fernandes prioritises the Premier League over the other options he has. 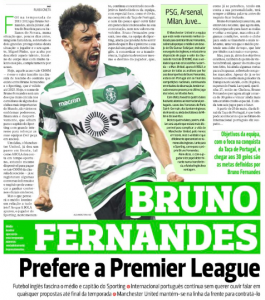 A Bola uses the word ‘should’ to say the midfielder is likely to move to England, claiming that he’s a man of strong opinions and will have a big part in choosing where he’s heading to.

Fernandes is said to be focused on Sporting for now, so it’s likely that things will only move at the end of the season.

Arsenal just need to be aware that with 28 goals and 15 assists this season so far, the 24-year-old won’t be cheap.