Two days ago, we covered claims made by Mundo Deportivo that Ronald Koeman is ‘confident’ Liverpool’s Georginio Wijnaldum will arrive at Barcelona after this season.

He has less than six months left on his contract with the Reds and earlier reports stated the midfielder turned down the first renewal offer from the Merseyside club.

The Netherlands international, along with Eric García and Memphis Depay, was wanted by Barcelona last summer. However, the Catalan club failed to land any of the three.

Barca eliminated Real Sociedad in the Spanish Super Cup this week and Koeman was left with limited options on the bench for the cup tie.

Friday’s edition of AS explains the Dutch coach is demanding signings in the winter market.

It’s claimed ‘Koeman has a plan’. The Manchester City defender and the Lyon forward are his preferences, and with time, he has been more burdened with reasons to take Wijnaldum.

Online, AS provides additional information. According to the report, Jürgen Klopp’s man has ‘given the green light’ for Barcelona to sign him.

However, the economic situation at the Camp Nou ‘does not invite optimism’ for Koeman to complete all three signings. 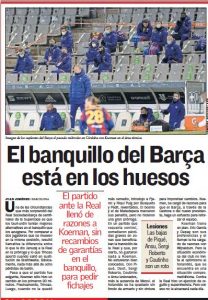 With several players sidelined due to injuries, AS warns a lack of signings in the winter market will only make it more difficult for Koeman in the second half of the season.

Should Barca fail to sign Wijnaldum in January, the Liverpool player can join the Spanish giants as a free agent in the summer.