Eric García was a priority target for Barcelona last summer and Liverpool star Georginio Wijnaldum and Lyon forward Memphis Depay were added to the list after Ronald Koeman was appointed as their manager.

The Catalan club failed to land all three players, but they continue to be linked with them.

Wijnaldum has less than six months left on his contract at Anfield.

On January 8th, Mundo Deportivo reported the La Liga side failed to sign the midfielder last summer due to their ‘delicate financial situation’. It was also explained the player has rejected a renewal offer from the Reds because he ‘continues to think’ about Barca.

He states the former Everton manager’s demands are from the sporting necessities point of view as the squad is currently impacted by injuries to key players. 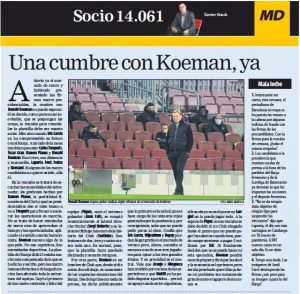 the Liverpool player, the Manchester City defender and Depay can arrive at Barcelona for free later in the summer.

The Dutch coach, however, needs at least one of those three players to arrive in January.

Koeman’s confidence of his compatriot’s arrival as a free agent hints Wijnaldum has decided not to sign a new deal with Jürgen Klopp’s side.