When it comes to Atletico Madrid players and the Spanish and English media continually linking them with Premier League sides, Liverpool isn’t often the main club chosen.

The Manchester clubs and Chelsea are more often pushed forward, but Jurgen Klopp’s side get a mention in Monday’s edition of AS.

Saul ‘wants to leave’ Atletico this summer, according to the claims, and Liverpool, along with both Manchester sides, are said to be ‘very attentive’ to the situation.

Despite appearing in 41 matches for Diego Simeone’s side last season, Saul has lost some prominence at the club. Towards the end of the season he rarely played the full 90 minutes for Atletico in La Liga, and missed out on Luis Enrique’s squad for Euro 2020. 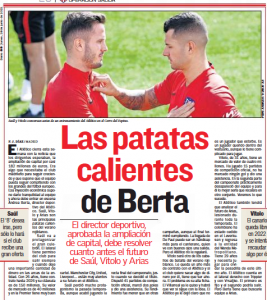 midfielder, that’s now just unrealistic. AS say Saul’s market value is €40m, and Los Rojiblancos will sell this summer if they get a ‘great offer’.

The Spanish newspaper don’t offer anything else about Liverpool’s interest, they’re just hyping it up and insisting the Reds are ‘very attentive’.