Sambi Lokonga to Arsenal is a story which has been building in the European media over the past few weeks.

Claims of interest originated from Belgium, with the Gunners said to be in talks with Anderlecht to seal a deal for the player.

Over in Italy there’s been repeat claims which have been very positive for the Premier League side. There’s been serious interest in the Anderlecht player from Serie A clubs, but nearly every time that’s been reported, the big cloud of Arsenal has been included in the reports.

As far as Italian clubs have it, Lokonga prioritises a move to Arsenal above anything else, and therefore, Serie A interest has been put on the back-burner, only to be brought back if a move to the London club fails.

Monday’s edition of HLN, a Belgian newspaper, states Lokonga is no longer expected at Neerpede, Anderlecht’s training base. That means he wouldn’t be starting preseason with them. 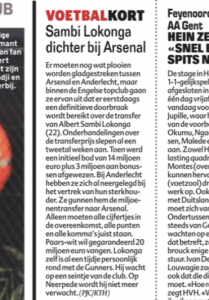 The player is described as being ‘closer’ to Arsenal, and there’s an assumption a ‘definitive breakthrough’ will soon be made in talks between the two clubs.

Anderlecht are prepared to allow Lokonga to complete his dream move to Arsenal, and once everything is agreed they expect to get a €20m deal.