Liverpool remain in contact with Schalke defender Malick Thiaw after their previous interest in the youngster.

The Reds were heavily linked with a move for the centre back last year, with reports in March that they were at the front of the queue for his signature.

It had been felt that they would make a move in the summer transfer window but that never happened, with no new centre back arriving at Anfield.

That’s something that has come back to bite Jürgen Klopp, with Virgil van Dijk’s season-long injury meaning they are now short in that position.

The feeling is that Liverpool will look to rectify the situation in January and several names have already been linked, although Thiaw has not been among them.

It appears he is one to keep an eye on, though, with SportBILD reporting that ‘Liverpool maintain regular contact’ with the defender through their scouts.

That is all they say; there is no mention of an impending Liverpool bid or even a hint that the Reds want to make a move for him, just that they are keeping in touch and presumably keeping an eye on him. 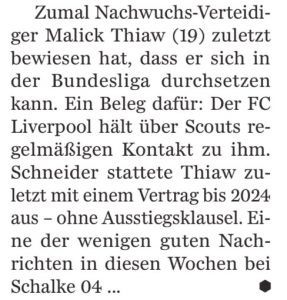 However, should they wish to make a move in the near future, they will face a fight to get him as a result of their interest earlier this year.

Those rumours pushed Schalke to get Thiaw signed up to a new deal that runs until 2024 and, crucially, doesn’t include a release clause.

That means if Liverpool do want him, they will have to negotiate with the German side, and presumably pay a premium price in the process.