On Tuesday, David Alaba confirmed he will leave Bayern Munich when his contract with them expires at the end of this season. He also revealed his agent is “negotiating with other clubs”.

Real Madrid, Barcelona, Liverpool and a few other top European clubs are named as potential suitors for the 28-year-old.

The Austria international hasn’t revealed where he will play next season, but his comments created headlines all across Europe, including in Spain.

Sport on Wednesday state there will be an ‘open bid’ for the versatile player, who can operate as a centre-back, left-back or a defensive midfielder.

Liverpool get a mention, along with Manchester City, Chelsea and Paris Saint-Germain, and it’s claimed these clubs ‘began bidding’ for the Austrian in January.

That’s about the only information the newspaper provides about the Merseyside club as the main focus is about Los Blancos.

Sport explain there’s ‘silence’ in Madrid, but ‘optimism is palpable’ because the deadlines set for his signing are being met. There’s no mention of what these deadlines are. 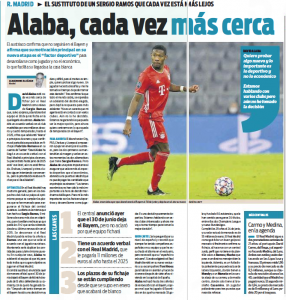 As per the report, the La Liga winners are ready to offer Alaba an annual net salary worth €9m plus bonuses, the same deal which they offered to Ramos and he turned down.

It’s not clear whether Real Madrid will withdraw their offer for the Spaniard if they manage to sign the Bayern star.

Liverpool, for their part, started their work from January and they will have to step up their efforts, if they retain any hope of beating Real Madrid to his signature.