Despite an upturn in their club’s form, most Manchester United fans will be in agreement that another centre-back wouldn’t go amiss at Old Trafford these days.

The likes of Harry Maguire and Victor Lindelöf, while adequate for the role, aren’t of the calibre expected from a club of the Red Devils’ stature, which is why we could see a shake up in the department come the summer.

Various names have been linked, including that of Nikola Milenkovic, currently at Fiorentina.

The Serbian’s contract with the Serie A side comes to an end in 2022, meaning this summer, barring a renewal, will be the ideal time to get a transfer together for interested parties.

Gazzetta dello Sport, however, do not think a new contract between the two parties will be drawn up, and they are certain the player ‘will go to play in the Premier League’. 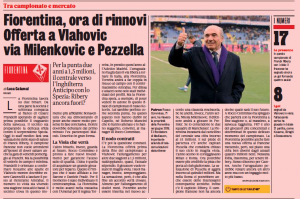 Not only that, but they state both Manchester clubs ‘are fighting over him’.

Having already improved their defence considerably over the past few transfer windows, it remains to be seen if Manchester City, also linked with David Alaba, need another centre-back, but a move to Old Trafford would certainly make sense for the Fiorentina man.

Milenkovic has been a reported target of United ever since the José Mourinho era, and it’s a story that has also managed to survive the subsequent managerial change.

As for the price, it’s expected for Fiorentina to ‘cash in a figure of around €35m’ for the defender.