Home Europe Ligue 1 forward “wouldn’t be against” move to Leicester in the summer,...
SHARE

In a couple of days time, on April 5th 2018, it will have been a year to the day since Hatem Ben Arfa last played for Paris Saint-Germain.

Despite scoring two goals and an assist against Avranches in the Coupe de France in that, the French attacking midfielder hasn’t featured in an Unai Emery match day squad since.

With his contract running out at the end of the season, an exit is inevitable, and, once again, Leicester City are being dragged into the mix by the French press.

The basis of the rumour is the same, with Claude Puel, who is extremely fond of him, the only reason why he would consider moving to King Power Stadium, even if his preference would be to play in the Champions League next season. 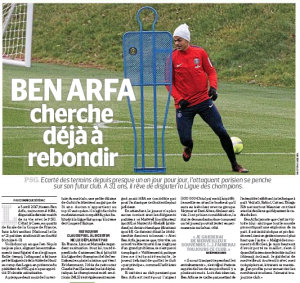 Le Parisien are the ones reporting it on Tuesday, claiming Ben Arfa “wouldn’t be against” a reunion with his former manager, who oversaw his rejuvenation at Nice during the 2015-16 season.

Lyon and Marseille are said to be keeping an eye on his situation, while some MLS clubs have also expressed an interest, but a move to the United Stats isn’t something in the 31-year-old’s plans just yet.

The Foxes will inevitably be an option until he signs elsewhere, but, even with a Riyad Mahrez sale, we just don’t see it.

In fact, we’ve already voiced our opinion on the matter, and suggested Claude Puel looks elsewhere.