Whenever a story about Malcom pops up in France, Tottenham aren’t far behind, normally joined by Arsenal and Bayern Munich.

That hasn’t changed this week, as France Football have some new information about the Brazilian’s potential future destination, and it could now include Paris Saint-Germain.

Joining Mauricio Pochettino in the hunt for the 21-year-old is Antero Henrique, the Ligue 1 leaders’ director of football, who has told some of his friends in private that he is interested in the Bordeaux starlet.

In fact, the French magazine go as far as saying the former Porto director of football could use the quality of his network and his close relationship with Elenko Sports, Malcom’s agency. 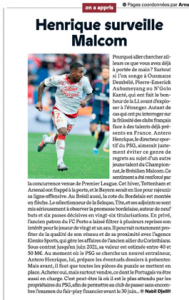 France Football put his transfer value at around €40-50m, which is a bit lower than what was quoted in January, and, if correct, will be music to Tottenham’s ears who have never been the biggest spenders in terms of single transfers.

As for Paris Saint-Germain, we all know what they can do on the transfer market, but, at the moment, their priority is finding a new manager and selling players.

Purchases come third on that list, which still gives Spurs the advantage, as they can get there first if they so wish.