Mid November sees yet more international fixtures come around and Belgium will be one of many countries missing players due to injury and fitness.

Belgian newspaper HLN report in their Monday edition that Roberto Martinez has a good chance of missing Moussa Dembele, with the Tottenham player picking up an injury.

Facing Wolves at the weekend, Dembele picked up an ankle issue and it’s explained that Tottenham ‘fear the worst’.

HLN add that ‘presumably the ligaments’ have been hit.

That would be the latest in a long line of such issues for Dembele and his injury record at Spurs isn’t something he’d want to shout about.

Jan Vertonghen will also be unavailable for Belgium, along with Kevin de Bruyne, and 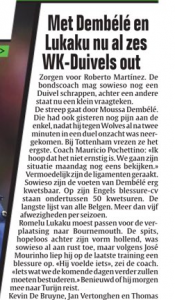 there’s also doubts around Romelu Lukaku and Marouane Fellaini for the matches against Iceland and Switzerland.

More than most, the Belgian contingent in the Premier League have faced a heavy schedule in recent years and that’s led to injuries for Tottenham players and others.

‘Expectation from player’s entourage’ Arsenal signing could be made official next...