Not only is there Neymar’s transfer fee to worry about, there’s also the player’s wages and associated costs. L’Equipe say a source close to the transfer has estimated the total of wages, expenses and commissions to be €60-70m per season.

To finance this deal, PSG need to sell players, and one of the prime choices right now is Serge Aurier. On July 16th, L’Equipe reported Manchester United had returned as a possible destination for Aurier, and Tottenham soon joined them.

Jose Mourinho’s men have been repeatedly linked since, both in the English media, and in claims Sport Witness has covered from France.

Tottenham have also been thrown into the mix, a product of selling Kyle Walker to Manchester City. France Football covered the possibility of Aurier joining Mauricio Pochettino’s side, but there was a problem.

There’s always a problem with Tottenham transfers, and it’s usually money. This time it was explained that Spurs aren’t willing to go above €20m for the player, with France Football saying the price is around €30m.

Now, L’Equipe also change their tune. After repeatedly quoting a price of €20-25m, in their Thursday edition the figure is €30m. There’s no reason given for the rise, but the 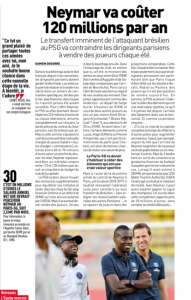 sale is framed as part of PSG’s need to raise money.

A sort of Neymar tax, perhaps.

It seems very unlikely the English clubs, Tottenham especially, would bend down to whatever PSG want, especially with the French club clearly not being inundated with buyers for the right back.

Should Aurier sort his work permit situation out, after not being allowed in the country to face Arsenal in November, then Manchester United and Tottenham may, and it’s still worth adding doubt, make a move… but they’ll prefer the €20m estimation.