Continuing what TF1 started a few days ago, France Football have an update on the Serge Aurier to Tottenham situation.

The Paris Saint-Germain right-back wants to leave the capital after seeing Dani Alves arrive on a free this summer, and went out of his way to ask Unai Emery if he could skip the club’s preseason in order to get a transfer sorted.

This comes a few months after the club’s president, Nasser Al-Khelaifi offered him a new three year deal in April, which the player politely turned down, making it clear he wanted to move on. 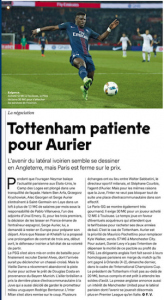 Both Juventus and Inter showed early interest, but with neither wanting to use up one of their non-EU spots on a right-back, that disappeared rather quickly.

That’s where the Premier League comes in, and why Tottenham, who have just sold Kyle Walker to Manchester City for around £50m, are among those interested.

France Football explain Paris Saint-Germain are being quite greedy, wanting around €30m for the 24-year-old, which Daniel Levy isn’t prepared to pay.

Holding talks after Tottenham’s 4-2 friendly win over their French counterparts, Spurs made it clear they wouldn’t go over €20m for Aurier, bonuses included, and are prepared to wait until later on in August if needs be for the Ligue 1 side to become desperate to sell him to get their price.

Don’t mess with the Levy.

It still remains to be seen whether Serge Aurier would be able to get a work permit, after being banned from entering the UK in November.